Age Ain't Nothing But a Number

There was an interesting article in Sunday New York Times on political and economic differences between generations.

The article's main focus is on differences in voter preferences and how a large chunk of federal spending is a transfer from young people to old people (Social Security, Medicare, etc).

Their are also some really cool graphs on changes from 1992-2010 in median net wealth and income for different age groups.  It's pretty well known that median income growth has been pretty stagnant for at least the past decade, and this is apparent in the data.  However, there are some large differences across age groups, with older people doing relatively well.

Update:  I have gotten some very good comments on this post.  Thanks for that!

I was interested in knowing what the picture looked like before the recession.  The recession struck around the end of 2007 and most of the damage occurred in 2008.  Here are the pictures for change in net worth and income substituting 2007 in for 2010, which hopefully shows us what was happening prior to the recession. 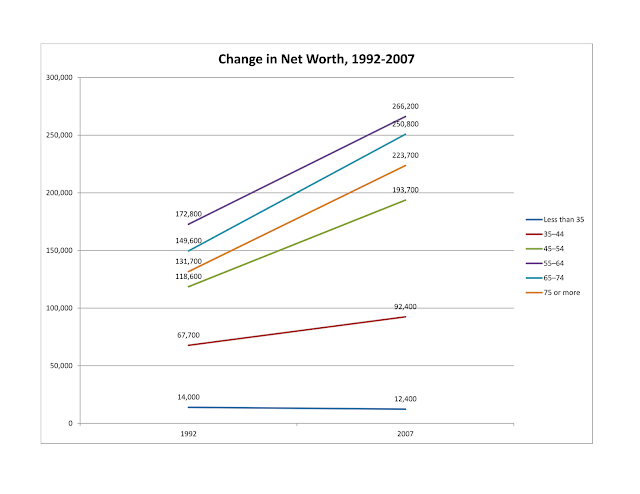 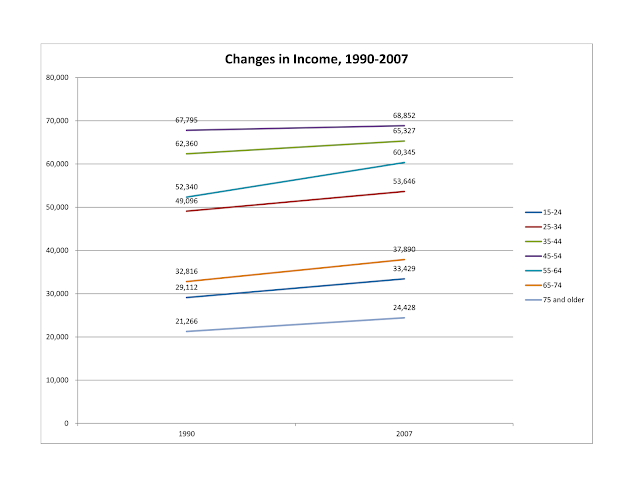 It actually looks quite different from the NYT charts.  It seems that all age groups were seeing gains prior to the recession, and that the recession has taken a different toll across these age groups.

Those age 65 and older have held onto their gains through the recession, and just about everyone else has taken a step back.  I agree with Mark in the comments that this likely has to do with retirees having more guaranteed income and less risky investments.  Also, his theory on housing values makes sense to me.

By the way, the entire data series for net worth can be found here:
http://www.federalreserve.gov/econresdata/scf/scf_2010.htm
in this file:
Estimates inflation-adjusted to 2010 dollars (5.5 MB Excel)

And for net income here:
http://www.census.gov/hhes/www/income/data/historical/household/
in table H-10: